Lovers Only 3 - Yume wo Egaku Etude

Bloody long review again, but I couldn't help it. It was a good story and I just have a lot I want to write about. 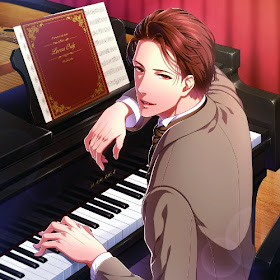 
Lovers Only is a series that tells more mature love stories. Both in terms of being a bit more serious and not all fluff, and in that they tend to be more explicit. The third CD is a story about a music composer and one of his fans (meaning the listener).

Tonegawa Satoru (CV: Midorikawa Hikaru) is a successful composer who does a lot of soundtracks for TV and movies. Recently he has been suffering from a slump however, and has started to dislike his work. This has resulted in him sleeping with lots of different women, which caused the media to become mostly interested in who he is dating, which in turn only annoys him even more and only worsens the entire situation.

Every time he is asked whether he has anyone he likes he remembers a certain woman. Before he debuted he and a couple of friends held a live performance. The people there to listen were mostly friends and family, but there were a couple of girls that were neither so he went to thank them. They become good friends, and started to hang out together. When two of his friends went abroad after they graduated from university however, they sort of lost contact. One of the girls still continued sending letters whenever he published a new album or gave a live performance, writing down her impressions and thoughts.

Just when Tonegawa is thinking of her after a particularly annoying press conference and after party while downing one drink after the other, she (meaning you, the listener) walks into the bar together with some friends. They make eye contact and recognise each other. She comes over to talk, and they spend some time talking together. After a while a pianist starts a live performance and plays some jazz tunes. Everyone is enchanted by his performance including you and Tonegawa. However this also reminds Tonegawa of his current slump, and he tries to get up and leave.

Unfortunately he drank so much that he can hardly stand, and you end up taking him to a hotel so that he can rest. When he wakes up after a while he confesses that he is in a slump and asks you for your honest opinion on his most recent work. You answer that you have stopped sensing any feelings of 'happiness' and 'fun' in his music, but also say that if this is not what he wants to do he should simply find what he wants to do again - it is never to late for that. At this point Tonegawa his being drunk and his feelings for you become too much and he forces himself on you, only focussing on his own satisfaction however.

When he wakes up the next morning you are already gone, leaving nothing but a letter. In the letter you have written down your feelings: it ends with you saying that after writing all of this, you realise that you really did love him. Obviously Tonegawa is ridden with guilt now, especially because he liked you as well (in the past he hid this because one of his friends also liked you). Back in his studio he searches for your letters and starts reading all of them again, and is moved by how precise you have written you thoughts on his works. He sends you a ticket for his next concert, with his apologies and expressing his wish for you to attend the concert. You visit the concert, and at the end he plays a song that he has written especially for you - his longtime fan.

While everyone else is still applauding he grabs your hand and you leave together. So that he can apologise and tell you that he loves you. This of course all ends in the long awaited sex scene, and for once I am going to write something about it. Because it managed to surprise me in a lot of ways.

First of, as an apology for having his way with you the last time he says he will let you do whatever you want. And you actually put a blindfold on him and bind his hands and take things in your own hands, err, mouth. This means that the listener is for once not just passive but actually assertive. The second thing was a sentence I had never expected: Tonegawa asks you whether it is ok to do it from behind. I did so not see that one coming, nor did I ever expect to hear a sentence like that in any situation CD. The third thing was that the bed sounds have been upgraded again. You can actually hear the rhythm this time (;*ﾟДﾟ;*)ﾊｧﾊｧ. Not only that, this time we also get squelchy noises at the appropriate points. Those were definitely not there before.

Afterwards -and still in bed-  Tonegawa asks you to marry him. YES. Finally a Lovers Only with an actual happy ending!!(whoohoo!)

So this time most of the bittersweetness was in the middle of the story instead of near the end. The scene were Tonegawa is reading your letter was beautiful. All of the emotions just pile up there. The music playing during that scene was also perfect for it, it seemed to partially build up with the emotions.

Speaking about the music, I loved almost all of the music in this CD. All of it except for one crucial piece: the piece he wrote for you. While the rest of the CD uses jazz pieces with an actual piano that piece seems to be using a keyboard and synthesisers instead, making it seem cheap in comparison. Which is a downright shame. It is after all the piece he wrote for the person he loves. A full version is included with the CD, and while it does get more interesting after the first part, it still sounds cheap.


The freetalk that comes with the CD if you got it at MomoGre their official store feels very... intimate? Midorikawa-san answers all the questions very seriously and calmly, and talks about how fan letters have helped him realize things about his own acting. I was quite surprised how much he talked about receiving fan letters and it was interesting to listen to.


Conclusion:
I thought that after listening to the first two CD I would have been used to how explicit the series is, but obviously not. Several phrases that I didn't expect and all those bed sounds (coupled with Midorikawa-san his breathing) left me completely flustered. I can't decide whether I liked this one or the first one best; the first one wins points for the seiyuu and setting, while this one wins when it comes to the story.

PS: After staring too long at the cover because it is so pretty I realized that even though the shiny surface of the piano shows a reflection of the keys, Tonegawa his hand is not reflected even though it should be. なにこれ？幽霊？
エリ at 12:00
Share