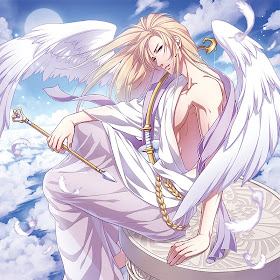 
Lovers Only is a series that tells more mature love stories. Both in terms of being a bit more serious and not all fluff, and in that they tend to be more explicit. The second CD is a story about an angel who is supposed to search a new love interest for you. To be able to pick someone you like he disguises himself as a human and begins to spend time with you.

The Angel (CV: Toriumi Kousuke) received an order from the goddess Venus to find someone for you to fall in love with. You just had your heart broken, so you need someone new to fall in love with. When he arrives in the human world he finds you feeding a small kitten in a park on the way to your work, and immediately likes you.

To talk to you he disguises himself as a human and enters the shop where you work, and he asks you to help him find a present for a girl. He starts to like you even more after talking with you, and (in angel form) follows you to your house. As soon as you arrive home you break down in tears because of your heartbreak, and he resolves to find someone who will treasure you. But he also wants to find someone who suits you, so he decides to disguise himself as a human to learn more about you so that he can find the right person.

The next morning he puts this plan into action. When you are feeding the kitten in the park he calls out to you, pretending to also feed it at times. You decide to make a schedule to decide who will feed on which days, and this is how you start talking. Soon however, you start to spend more and more time together, until finally you spend at almost every day off together.

He starts to realize that he has fallen in love, but Venus is also becoming impatient and wants him to pick a boyfriend for you soon. So he decides to visit you one last time to say goodbye. You are also visibly shaken by the fact that he has to leave (he tells you that he needs to move somewhere far away because of his work) and at that point he truly realises that he loves you, and wants to kiss and hold you no matter what the consequences.

The consequences of him sleeping with you are what makes this CD so bittersweet though: all of your memories of him are erased (apparently that just happens if an angel sleeps with a human). As a result you don't remember meeting him at all, nor do you remember who gave you the mirror you often use (that was the gift you picked at the start of the story, and that he eventually gave to you). One year later he is looking at how you are doing, and you are happily dating with the boyfriend he picked out for you - who looks exactly like how he looked when he was disguised as a human.

Just like before the entire CD is told from the male perspective, giving you insights on his thoughts as well. My problem with the first CD was the switching between narration and the sex scene, and they actually solved most of my issues with that. This time you can still hear some of the bed sound effects during the narration at times, making the switching a bit more subtle. I also swear that there are more bed sounds and that they became more real.

The ending is just so sad... You don't even remember that you met him, while he still loves you and is the only one to remember all the time you spend together. Somewhere in the beginning when you choose the mirror as a gift he sees a (blurry) vision of the two of you dancing together, so at first I thought they were going to throw in some "we met in a previous life" plot, but they didn't. (Which is a good thing if you ask me).

Toriumi-san uses a slightly higher pitched voice than I am used to, which I think is a missed opportunity. Yes, this makes the angels seem incredibly sweet and caring, but I think I would have preferred an angels with a sexy deep voice if we are going to end up going all the way.

Sadly, I have a version without free talk, so I can't comment on that.


Conclusion:
Once again a bittersweet love story with a sad ending. This time the story a least does have a definitive end though (not knowing exactly how the affair from the first CD is going to end made me feel even more sad then the actual story itself). This one was a bit cuter, more fluff and kittens (literally).
エリ at 12:00
Share